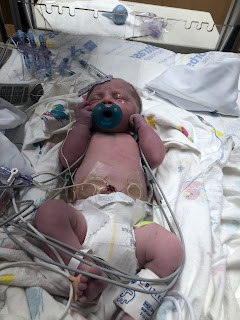 He was moved to CVICU and Misty was moved to the post-partum floor at Texas Children's Women's Pavillion.   The buildings are connected and relatively close.

During the night after birth, Jude's oxygen level began to drop.  Jude's goal oxygen level is anything greater than 75%.  During the night, his oxygen level dropped into upper 60s and low 70s.  This was what our fetal cardiologist feared.  She was afraid that as the ductus arteriosus closed following birth that Jude would not have enough blood flow to his lungs.   When his oxygen levels dropped the doctors at Texas Children's started Jude on an IV medication called alprostadil.  This medication causes the ductus to re-open and remain open.   This greatly helped Jude's oxygen levels and he remained stable since with saturations in the 80s.

At this point, the specialists at Texas Children's are trying to gather more information about how Jude's heart is going to respond over the next several days.  The resistance to blood flow in his lungs will continue to decline over the next week.   This could result in Jude being able to get enough flow to lungs even when alprostadil is turned off.   Alternatively, if he must have the medication to maintain adequate blood flow then he will need a surgical procedure because the medication is only a temporary fix.

Today, Feb 1, Jude and Misty are both doing well.  He remains on the prostaglandin.  Misty is doing great and is up walking around.....no small feat one day after C-section.

This weekend will largely be a wait and see event.  See how Jude responds.  Can the medication be weaned?  If not, what type of surgery do we need to prepare for in the next 1-2 weeks.

Here are some photos of our sweet little guy: 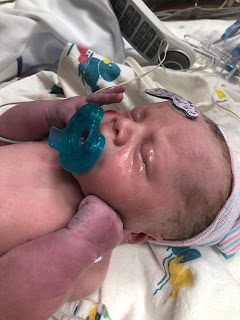 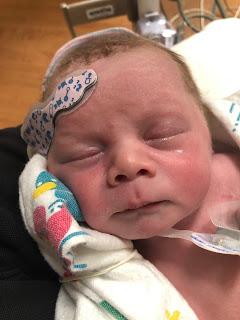 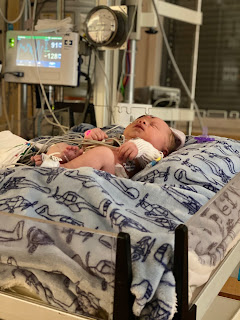 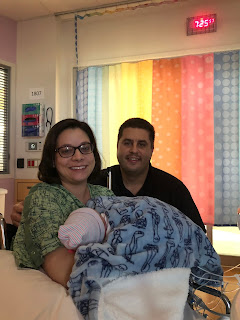 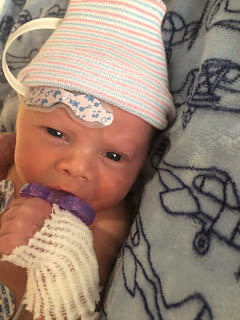