Today started off okay. Jude did run a fever last night, but they were able to treat it with Tylenol and it went away. Results from a few more tests came in and they ruled out a few of the viral causes of meningitis. The other results will take several days to get back. In the meantime, he continues to get iv antibiotics.

He had a PICC placed in his leg this afternoon and that procedure went well. It will make it easier for them to draw blood going forward.

Then this afternoon while I was holding him, his heart rate, sats, and breathing plummeted. Thankfully Jesse was nearby and able to get him to start breathing again. The whole team came in at that point to assess him and get some medications going. He is currently getting a continuous EEG to monitor brain activity. They think he may have had a seizure but are unable to say for certain. It was extremely scary. And it’s so hard to hear him cry and not be able to comfort him. He has to stay in the bed and can’t eat for now, so he’s upset. Hopefully this was a one time episode and he will be okay. We both thought we had lost him today. Jude needs a break. His little body is having to work so hard to just survive. 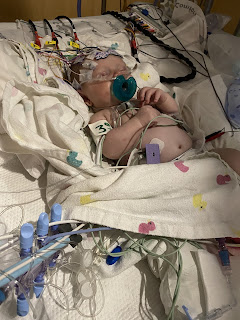