First, my new favorite photo of my two men hanging out in Houston.  The bond these two share already makes my heart hurt a little.  Jude loves his daddy very much and Jesse's love for Jude is so all-encompassing and showing. 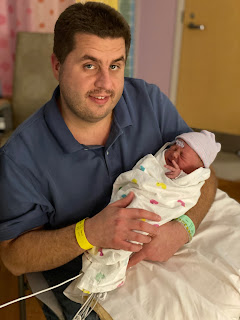 Today is a day of figuring out how Jude is going to do off his medication.  This morning at 5 a.m. they took him off the medicine that was allowing his ductus to stay open.  Everything was going smoothly and I was allowed to hold him skin-to-skin for several hours this morning.  It was a wonderful bonding time and I loved every second.

To explain logistically how this is working:  I am in the tower next to Jude's, about a 5 minute wheelchair ride away.  I've been going back and forth several times a day (with the help of my sister and Jesse) to see him.  The plan is for me to be discharged tomorrow, so that will change a little about timing and seeing Jude.  His room is set up to bed-in with him, but it's not ever completely quiet or private, so it makes it a little hard to spend the night.  Jesse did spend his first night with him, but I don't think he ever got any sleep.  It seems like it will be better for us to spend our days with Jude and nights at the apartment.  Thankfully, it's close by and will be relatively easy to go back and forth.

When we returned after lunch today, his oxygen stats started dropping again.  The team determined it was best to put him on oxygen and see how he does.  For now, they have not restarted the medicine, but that will be the next step if his oxygen level falls again.

I'm going to try to explain what is happening with Jude's heart right now in a way over-simplified way.  The artery that carries blood from Jude's heart to his lungs (pulmonary artery) is too small and so his lungs can not get enough blood.  The ductus arteriosus is a special connection between his aorta and his pulmonary artery that usually closes at birth.  Because his pulmonary artery is so small, blood was actually flowing backwards through the ductus as a "short circuit" to get blood to his lungs.  After birth this short cut began closing and his oxygen levels dropped.  The iv medication (prostaglandin) keeps this short circuit open.  However, Jude can not stay on this medication forever.  If he can not get enough blood flow to the lungs without the medicine he will need surgery in the next week.

Tomorrow the cardiology conference will meet.  This is a large meeting of cardiologists and cardiac surgeons here at Texas Children's that occurs 1-2 times a week.  During these meetings they discuss all the patients admitted and make plans for their care.  In this way, they can pull from the experience of multiple people instead of one person making all the choices.  Tomorrow will be the first time Jude has been presented since being born and so it is likely that we may have a better idea of care path forward after tomorrow.

At the same time that Jude's doctors have been working on his heart they have also been performing multiple tests to make sure nothing else about Jude is abnormal since cardiac defects often occur in tandem with other abnormalities.  So far they have not found any other abnormalities outside of Jude's heart condition.  Yay! 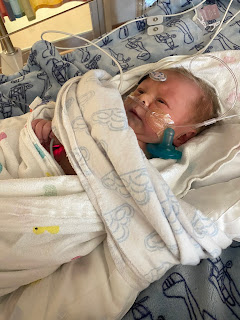 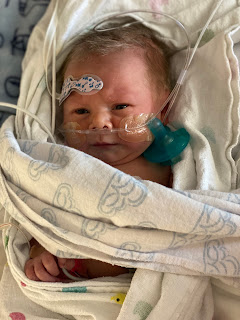 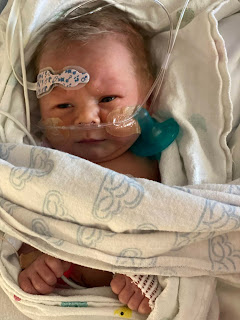 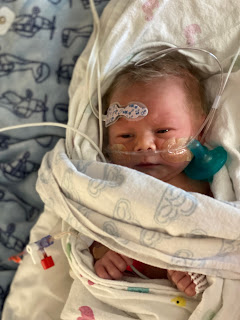 Isn't he a ham already?  He was not happy whatsover about having anything in his nose and he was letting everyone know about it.

Also wanted to give an update on my other two bambinos hanging out in Louisiana.  First, Alex had his first school bus ride home this past week.  Where we live in Texas, Alex is able to walk to and from school, so he misses out on getting to ride the bus.  He looks pretty excited to me, don't you think? 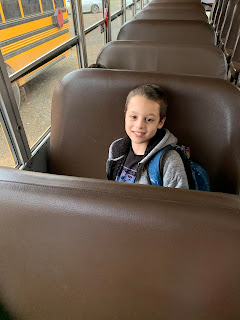 Second, they spent the weekend with a different set of grandparents and have enjoyed getting some quality with them. 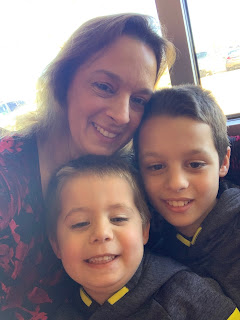 Thank you all for reading along and for all the thoughts, prayers, and kind words.  We've been blessed with a wonderful hospital that's taken great care of myself and Jude.