Good morning! Just wanted to do a quick update on Jude. He is doing really well meeting all the goals the so far.  Since surgery he has had the following removed:

Every time something else gets taken off we have a small celebration in our room :) The hope is that he will be able to move to step down in the next day or two.  He most likely will go to step down with his chest tube in since he is still having some drainage, but that is normal.  As far as pain, they have done a great job of keeping his meds going.  We did have one time last night where he started to be in pain, but they gave him some extra, and it did the trick.  He loves the Zoo channel they have here and it seems to calm him down. 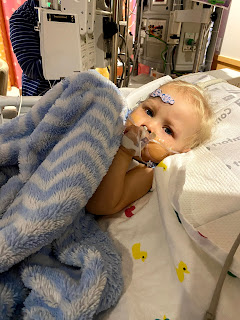 I got to hold him last night and we both enjoyed snuggling. 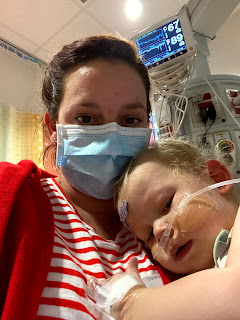 I spent the night with him last night, but Jesse just arrived and is getting his snuggles in now. (Apparently they both like the Zoo channel) 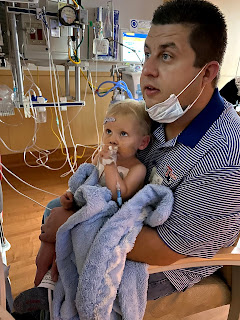 Yesterday went much better than I anticipated.  Our nurse yesterday was the same one we had during the worst day of Jude's stay last time (not her fault, he was just really sick during that time).  So we were so thankful that instead of adding lots of things, she got to take lots of things off. We even all had a good laugh about it. The OT and PT services came by and had him sit up which was a lot of effort at first, but he is doing better with it by himself already.
Thank you so much to everyone for their kind words, prayers, food gift cards and love.  We truly appreciate you all!
Posted by Misty at 7:45 AM