We Have a Surgery Date!

Good morning!  I know it's been a while since we updated last, but thankfully our lives have been relatively uneventful the last few months.  Lots of quarantining at home, going to doctor appointments, and hibernating from the ice storm last week.

Back in November, when we saw the cardiologist in Houston, the plan was to get Jude presented in conference so his open heart surgery could be scheduled.  We gave them a couple of months, so the team would have time to present, make a plan and account for the holidays.  After not hearing from them by the beginning of the new year, I reached out just to check in.  Unfortunately, his cardiologist broke her arm badly the afternoon of the day we saw her.  She had to have surgery and had been out since that day.  Which means his notes never got finished, he hadn't been presented yet, and his cardiologist wasn't scheduled to be back in the office until May.  After lots of follow-up calls, pleading, and requests we finally got a consult scheduled with his surgeon at the end of January.  However, the day before we were supposed to meet, the surgeon had a last-minute emergency surgery and we had to reschedule.  That happens a lot at Texas Children's since they do lots of transplants and severe cases.  Nothing to be mad about - I said lots of prayers for the family who had to take his spot, because if it's emergent that's never a good thing.  We were able to schedule a tele-visit for the following week, which went well.  We were able to talk to the surgeon, ask all our questions and be briefed on the surgery options for Jude.

The plan was to hear back from them in the next week or so to schedule his surgery.  However, Mother Nature had other ideas in mind and sent the polar vortex.  Texas was hit hard and the electrical grid was pushed to its limits, which means the hospital had to cancel surgeries and not much was done last week.  But this morning, I finally got the called we had been waiting for since November - Jude is scheduled for surgery on April 22!

We are nervous/excited.  Having this surgery will help improve his oxygen sats so he can breathe better, grow more, and live an all-around better life.  But open-heart surgery is nerve-wracking. On top of that, we aren't 100% sure of the exact type of surgery they will be doing.  And we won't know until they actually start the surgery. There is a very small chance that Jude will be able to have a bi-ventricular repair, which would entail the doctor fixing his heart to be rewired as it should be. In essence, Jude could live a completely normal life if that is the surgery they are able to do.  However, the odds are very, very small that this type of repair will be possible.  Most likely he will need a 2-step heart surgery called the Glenn and Fontan.  The Glenn would be done in April and then another open heart surgery would be required to do the Fontan when he is 4-6 years old.  This is not a fix, but rather a circumventing of the heart.  Jude would still live a mostly normal life, but there would be limitations on what he can do throughout his life and health issues in the future. The bi-ventricular repair would be the optimal surgery, but we will be thankful for any help that he can get.  One of the main reasons we have continued our care in Houston is to provide him this opportunity to have a bi-ventricular repair.  There are only a couple of programs in the country that offer that as an option for his particular heart condition, and we want to give him the best opportunities we can.

Future plans include a cardiologist appointment in Houston in March just as a check-up.  Since his cardiologist is still out (she had to have another surgery on her arm), it will be with a new, temporary doctor.  It's super important that we keep him healthy leading up to his surgery (no fevers, runny nose, etc.) or he will have to rescheduled.  For the winter season, he has been getting monthly vaccines to help prevent RSV and those go through April.  For his surgery, we have to go down a couple of days before to Houston for pre-op appointments including COVID testing, blood work, X-rays, meeting the surgeon in person, etc. The average time in the hospital for the Glenn procedure is 7 days, followed by a week in Houston and follow-up appointments with the surgeon and cardiologist to make sure Jude is handling everything well before we return to Dallas. We are all hoping (his hospital team included) that this experience will be much smoother than his stay at birth.

In other news, Jude turned 1 year old on January 31!  He now has 6 teeth (he decided to cut them all at once) and loves to grind them together (the noise that makes me literally want to climb the wall!!). He had a Developmental Outcomes appointment in January and is still in a good range developmentally.  We will meet with them again in Houston when he is 18 months old. The dietitian has been helpful in making sure Jude is getting enough calories as we transitioned over to whole milk.  He gets to drink Pediaure now, in addition to milk, which he likes.  He has finally made it back to the 10% in his weight and is still barely on the chart for his height.  He's gonna be a little short. 😊 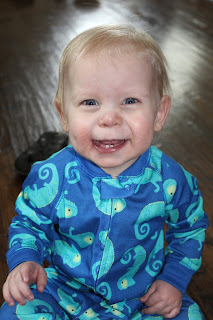 Alex and Josiah are still attending school virtually and enjoying it the best they can.  Our hope is that they will be able to go in-person next year, but it will depend on the number of cases and vaccine opportunities for them.  (Jude will still have lower oxygen sats if he has the Glenn, which means it will be important to keep him healthy leading up to his next open heart surgery.)  Alex will be starting middle school and is excited to be able to pick out his classes for next year.  Josiah just keeps asking me how many days until his next birthday. 🤦🏻‍♀️ 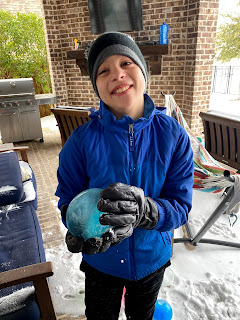 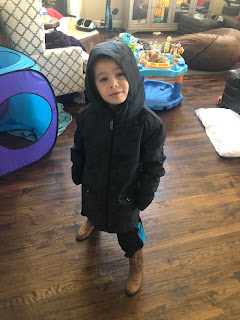 This post was a little longer that I originally intended, but wanted to update everyone.  We so appreciate the kind words and prayers from everyone.  Thank you for the love you have shown our family!