One of the goals of this blog is to also help others that may be in a similar situation as us (not from the Houston area, but looking at potentially temporarily relocated for their heart baby).  So in addition to updates on Baby Jude and his health, we also want to include real-life events and things we experience on our journeys to Houston.

At our last visit on December 23, we chose to spend an extra night in Houston, hoping to have time after our appointments to take the boys to do something fun.  The last two times we had gone for appointments it was a quick turnaround there and back, which isn't much fun for our 10 and 4 year olds.

One activity they had been asking to do was to take the train around Hermann Park.  You can use this link for the official train information.  We were able to find a parking spot on the outskirts of Hermann Park, but then had some confusion about where to go to buy tickets for the train.  We could see the tracks, but didn't know the origin point.  After following the Reflecting Pool and walking around McGovern Lake, we found the Conservancy Gift Shop.  In the map below, it's the two black dots on the right side of McGovern Lake. 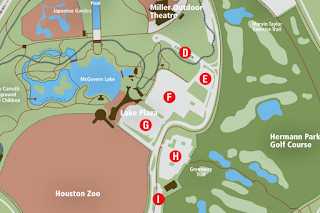 Here's a photo of what the train looks like during the day.  However, we were riding right at dusk, so it was a little harder to see.  They did have the train decorated with lights for Christmas though.


We had to wait around 15 minutes for the train to make it back to the station, then it was our turn to ride.  The ride around the park takes around 20 minutes and the kids really enjoyed it. 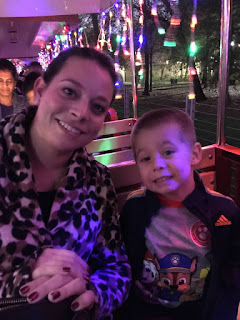 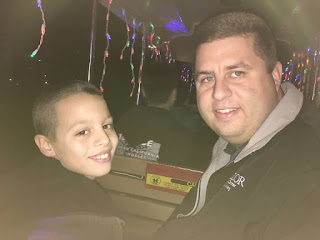 Our next stop, which just happened to be next door, was the Houston Zoo to see the Christmas Lights.  The zoo had opened while we were waiting in line for the train and there were a LOT of people going in.  Crowds are not something we really love to deal with, so we told the boys we would see what it looked like when we got off the train.  The line had gone away by the time we got off, so we headed over to the zoo.

Admission is a little pricey at $35 per person for anyone over the age of 2, but the quality of the lighting displays was superb. 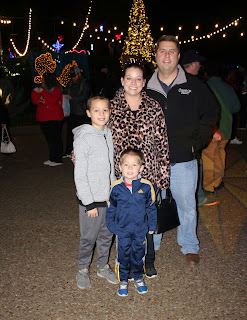 This area had music playing and my two love to dance.  I managed to get a short video when they didn't know I was looking. ☺

I didn't take any photos of dinner, but we did stop to eat at the Cypress Circle Cafe.  The food was surprisingly pretty good for food served at the zoo.  They really strive to be green and it was easy for me to find items that fit into my diet for my gestational diabetes.  There were also several food carts open selling drinks (including St. Arnold's beer) and snacks.  The boys picked up some cotton candy (while I internally drooled - I have a serious sweet tooth and it is hard to abstain!).

An animatronic dragon that was really beautiful and neat to see.  Josiah was a little scared, so he kept his distance.


Alex was a little nervous in this section.  For whatever reason he was convinced the polar bear was going to move when he stood next to it.  😂

They really outdid themselves with the Enchanted Forest section.  This photo truly does not do it justice.  The lights were everywhere and completely immersive and it felt like we were transported to another world.  Almost like visiting Willy Wonka with the large plants and all the colors. Beautiful! 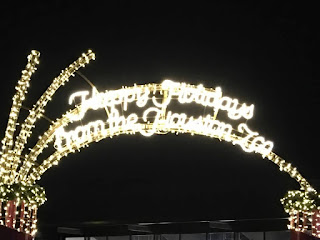 At the end, we stopped at the gift shop to pick up an ornament (it's our family souvenir that we buy anytime we visit somewhere).  It took us around 1.5 hours to see the lights and eat a quick dinner.  I was getting pretty tired from the walking at this point, too.  We all really enjoyed seeing the lights and it put us in the holiday spirit.  The boys were disappointed that they didn't get to see any of the animals, but the Houston Zoo during the day is on their wish list now.
Posted by Misty at 11:42 AM