On October 9th we visited the fetal cardiology center at Children's Medical Center in Dallas, Texas.  It was interesting and anxiety-provoking to sit through a fetal echocardiogram (an ultrasound of Jude's heart).  Getting an ultrasound of a 19 week fetal heart is an exercise in patience.  About the time we would get the images we needed, Jude would move.  After about 75 minutes of taking pictures it was time to sit down with the cardiologist and go over Jude's diagnosis.

Misty and I were hoping to hear that Jude had a problem but it was nothing major and would be an easy fix.  Unfortunately, what we heard was the opposite.  I remember feeling nauseous and angry and sad at the same time but was so busy listening to the doctor that I didn't have time to focus on those feelings.

Jude has a condition called Criss-Cross Heart.  That is the real medical name of his condition -- it is not slang.  This condition is rare with only 20-30 cases a year in the USA.  In fact, it is so rare that our fetal cardiologist in Dallas had never seen the condition in a fetus, though she had seen it in a child that had already been born.  In addition to the criss-cross heart, Jude also has a large ventricular septal defect (VSD), a double outlet right ventricle, and pulmonary stenosis.  In the paragraphs below I will attempt to explain all these defects.  The important thing to understand is that Jude's heart is actually a collection of heart defects that all began when his heart did not fold correctly when he was only a few weeks old.  Due to this collection of defects, Jude's heart is extremely complicated and is difficult to understand even for specialists who care for congenital heart disease daily.

To understand Jude's defect, it is actually helpful to understand a normal fetal heart first. 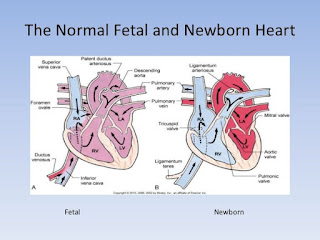 The picture above shows both the normal fetal heart and the normal newborn heart.  The two are actually slightly different due to the way blood flows through them.  Remember, a fetus (baby inside the womb) does not breath air through the lungs (actually it breaths amniotic fluid) and therefore gets its oxygen from the placenta.  Therefore, blood entering the fetal heart from below via the inferior vena cava (IVC) is high in oxygen (red blood) because it is coming from mixture of legs and placenta.  The blood entering the heart from above via the superior vena cava (SVC) is low in oxygen (blue blood) because it is coming from the brain and heart.  Blood from the IVC and SVC enter the right atrium.  It is difficult to tell on the picture above, but the blood doesn't actually mix equally in the atrium.  The blue blood is directed mostly into the right ventricle and the red blood is mostly directed across the atrial wall through a hole called the foramen ovale.  This hole is not usually present after birth and is part of what makes a fetal heart special.  Blood from the right ventricle is then pumped through the pulmonary artery toward the lungs.  However, the lungs are full of fluid and do not require much blood flow, so most of this blood is actually bypassed into the aorta through another special fetal part called the ductus arteriosus.  Remember, this blood was mostly blue and the ductus directs this blood down the aorta toward the legs and placenta to get more oxygen.  Meanwhile, the blood that crossed into the left atrium is pushed into the left ventricle and then out the aorta.  This blood is red and due to the location of the ductus arteriosus most of this red blood is directed toward the brain.  Therefore, oxygen rich blood ends up going to the brain and heart and oxygen poorer blood directed to the trunk and legs.

I know this a lot of info but hang in there!  After birth, the lungs fill with air.  Due to this, resistance to blood flow in the lungs drops drastically.  In addition, hormonal changes cause the ductus to start to close and the foramen ovale begins to close as well.  When these structures have all closed, the heart then looks like the heart on the right above (newborn heart).  Now, blue blood returns from the body to the right side of the heart, is pumped to the lungs to get oxygen, returns to left side of heart, and then pumped out to the entire body.  Notice that in the newborn heart there is NO right to left short-circuits and no abnormal connections between pulmonary artery and aorta.  In a normal newborn heart, the right side of the heart and the left side of the heart function independently of each other.  In reality, our heart is two separate pumps connected in series!  Understanding that the heart is two pumps in one will be essential to understanding Jude's defect.

As mentioned above, Jude's heart is actually a collection of defects as opposed to one defect.  The main defect that triggered all the other problems is the criss-cross defect.  Over the next several paragraphs I'll introduce each defect.  In addition, I'm going to show a picture our cardiologist drew to help make the point.  It is difficult to show Jude's defect in 2D pictures because his defect occurs in more than one plane.

First, criss-cross.  In the first weeks after conception when the heart begins to form it is actually a linear tube.  This tube swells in several locations and then folds and twists to form the complex structure that becomes the heart.  For Jude, during this process the folding did not occur properly.  The easiest way for me to understand criss-cross defect is to start with the normal heart pictured above.  Imagine you are holding this heart in both your hands.  Imagine you left hand is holding the ventricles (apex) and your right hand is holding the top of the heart (aorta, pulmonary artery and atria).  Now, twist the heart 180 degrees along the long axis by twisting your left hand like you would twist a ballon to make a ballon animal.  Keep your right hand still.   When you have done this, Jude's right and left atria will still be in the correct anatomic locations, however, his right ventricle is now on the left side and his left ventricle is now on the right side!  Blood stills flows correctly from right atrium to right ventricle and from left atrium to left ventricle, however, since these structures are no longer on same side the flow of blood spirals and "criss-crosses" past each other, thus the name of the defect.  In the photo below, the normal heart is "A".  Notice blood should move from RA to RV and from LA to LV.  This movement of blood should be parallel.  Jude's heart looks like "B".  His chambers are correctly connected but on opposite sides and thus the blood flows in an "X" pattern or "criss-cross" pattern.   "C" and "D" below are more complex variations which thankfully Jude doesn't have. 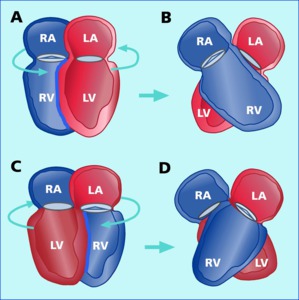 Criss-cross defects almost never occur in isolation.  Because of the abnormal twisting, the arteries draining blood from the ventricles are usually not able to connect in the proper locations.  For this reason, other heart defects usually develop to allow blood to flow through the heart.  Had these other defects not formed, its likely Jude would have died early after conception.  In the words of Ian Malcom on Jurassic Park, "life found a way."  Jude's other defects are really his body trying to work around the criss cross defect. 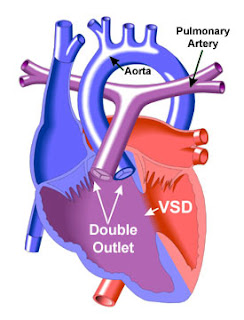 Remember, Jude's heart isn't this simple because the bottom part of his heart would be twisted.  In actuality, Jude's pulmonary artery and aorta sorta sit in the middle of the bottom part of his heart.  The photo above also shows a ventricular septal defect (VSD).  Basically a "hole" that connects the left ventricle and right ventricle.  Jude has a large VSD that essentially lets blood move between the ventricles making it less important where the aorta and pulmonary artery drain from because the entire ventricle basically functions as a single ventricle (more on this in later posts). 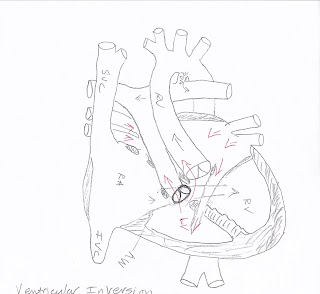 This final picture is a drawing of Jude's heart by our cardiologist at Texas Children's Hospital in Houston (more on how we got there later)!  Remember how I said it is difficult to visualize Jude's defect in 2D -- this is the best we can do in 2D.  Notice the IVC/SVC drain into RA.  The RA drains across the heart to RV.  The LA (not labeled in picture) drains across heart into LV.  The RV and LV are connected by a large VSD that is partially hidden in this image by the aorta and pulmonary artery.  The aorta and pulmonary artery drain from the center of the connected ventricle.  COMPLICATED!

The last part of Jude's diagnosis is called pulmonary stenosis.  This means his pulmonary artery is small compared to usual size.  This doesn't cause any serious problems in-utero, but could have serious consequences after birth.  Pulmonary blood flow in Jude's case will need to be a "Goldilocks" scenario.  Because his aorta and pulmonary artery drain from a common ventricle, it will be important for blood to flow in correct amounts to correct locations.  If Jude's pulmonary artery were normal in size, he would actually get TOO MUCH blood flow to his lungs because resistance to flow to the lungs is lower after birth than resistance of flow to aorta and flow always takes the path of least resistance.  So, having some pulmonary stenosis is a good thing and will protect his lungs.  However, if the stenosis is too severe he won't be able to get enough blood to the lungs to absorb oxygen and his oxygen levels will be too low.  In that situation, he would need an emergency procedure near birth to increase blood flow to the lungs.  This is the part of the diagnosis that is uncertain and will result in a "wait and see" game when Jude is born.

Wow!  Complicated, right?  It took our cardiologist in Dallas over an hour to explain all this to us the first time.  You can imagine we were both in shock.  Not only does Jude have a heart defect, but it is serious and rare.

The natural next question becomes, "how do we fix it".  That's another complicated discussion that I'll save for the next post.  However, I will say that was the icing on the cake for our bad day at the cardiologist -- it can NOT be fixed but we can make it better.